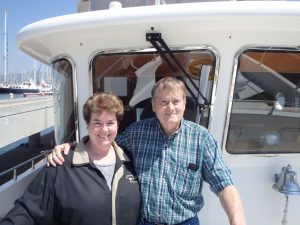 Much of my life had been spent in claustrophobic laboratories coercing finicky hardware to, perhaps, reveal some small esotery. Such research eventually led to a passage from Honiara, Guadalcanal to Long Beach, California aboard a Scripts oceanographic vessel – the R/V John V. Vickers. We were actually outside in amiable sunlight or under an ocean of stars, at sea in the seemingly endless Central Pacific. Our crew encountered both balmy calm and severe storm with brutal seas. We experienced the freshest of sushi and periods of persistent sea sickness. We became addicted to the adrenalin of discovery and endured the subsequent withdrawal once the measurements were concluded while still far from shore. Once finally ashore, even before gaining our land legs, the question was posed, “Would you do it again?” The unanimous answer was, “In a heartbeat.”

Since that voyage, I broadened my personal research interest to include long-range cruising. I studied the obligatory Beebe/Umstot Voyaging under Power, and George Buehler’s The Troller Yacht Book. I read numerous other books and magazines on seamanship, navigation, charting, radar, marine weather, marine diesel, navigation regulations, and the liveaboard lifestyle. I evaluated characteristics and reputation of the major brands, e.g., Nordhavn, Kadey Krogen, Diesel Duck, DeFever, Fleming, etc. However as a lifelong experimentalist I understand that when the time comes to transition from theory to practice, the value of actual hands-on experience is crucial. Based on exploring backgrounds and soliciting information form recent trawler customers and Southern California marine professionals, it was obvious that Jeff Merrill possessed the necessary credentials to provide that hands-on experience. After several discussions and meeting with Jeff, my wife and I concluded that Jeff not only possessed the desired credentials but indicated a real interest in assisting us explore the many trawler choices and eventually make an appropriate decision. We consequently ask Jeff to act as our broker.

As should be expected from any broker, Jeff managed the negotiation and purchase process flawlessly. However our choice of Jeff was based on a desire for competent assistance during trawler selection. And as his credentials suggested, Jeff’s knowledge of trawlers and ship’s systems was instrumental over the lengthy exploration process during which our initial assumptions evolved significantly. My wife appreciated the fact that he was equally sensitive to her concerns and showed no interest in rushing the process. Over a six month period Jeff assisted us inspecting trawlers from San Diego, CA to Anacortes, WA. This knowledge and experience subsequently allowed realistic comparisons between separate brands and individual boats equipped differently. He provided both a template for vessel comparisons and the rough estimates for retrofit cost to add the desired equipment, which proved reasonably accurate for the Selene 53 we eventually purchased.

We have had the Selene for six months and continue to be satisfied with our choice of trawler and with Jeff’s assistance in its acquisition. I look forward to once again experiencing voyaging over tropical seas – this time on my own schedule and this time with my wife. 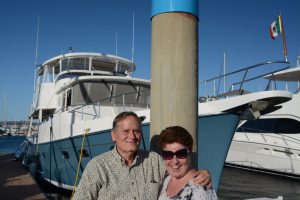