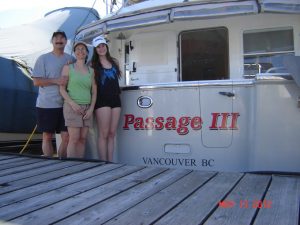 My name is Jeff Johansen and this summer my wife, Denise and I realized a dream come true by becoming the proud owners of N40-49, to be named Passage III.  We were ably assisted in this endeavour by Jeff Merrill from your office.  But this simple sentence does not begin to describe the help provided by Jeff that has allowed us to be “living the dream”.  I thought that I would drop you a line to make you aware of the extraordinary effort from Jeff and to thank PAE for making our dream a reality.

We live just outside Vancouver, Canada and I grew up on and around boats.  From the age of six I spent my summers on the family cabin cruiser plying the waters between Vancouver and Desolation Sound. Being an ex Navy man, my Dad would take our little 22 foot Sturdy Craft into out-of-the-way places and often into weather and seas that we shouldn’t have been in.  This was exhilarating for me and my siblings but not a lot of fun for Mom.  My brother and I spent endless hours in the v-berth looking at Boating and Sea magazines, dreaming of a power boat that could better handle the conditions we sometimes faced in our little craft.  Even at that early age we had a keen eye for more seaworthy, ‘trawler’ style boats and focussed much of our attention on the Grand Banks line of boats.  The die was cast and the Grand Banks was the boat that we drooled over through many a boat show and magazine article.

Years later (late 90’s) at a boat show in Seattle, my brother and I came across a 50 ft boat called a Nordhavn.  As soon as we saw it, we knew this was something very special.  I still vividly remember going aboard and every thing I saw and touched just oozed of quality and sturdiness.  After that show I started looking for information on this Nordhavn brand.  I found articles in several magazines, particularly Passagemaker Magazine.   I read with great interest the Passagemaker articles about the PAE development of a 40 ft model.  Later, my brother and I made a special trip to Seattle to see N40-1 that was offered for sale by another broker.  Although out of the question at that time, the Nordhavn 40 became my new dream boat.  I read everything I could find on Nordhavns, PAE, and voyaging under power.  I would only go to boat shows where I could see Nordhavns so I could learn more about them.

At a Trawler Fest show in Poulsbo, Washington, my Dad, brother and I met Jeff Merrill.  He was extremely helpful and knowledgeable and answered all of our questions.  Even though none of us were in the market for a new boat at the time, Jeff took the time to show us all the features that make a Nordhavn a Nordhavn.  That was 8 years ago!!

Since then Jeff has kept in touch through email, mail correspondence and phone calls.  My wife and I would catch up with him at annual boat shows and he always treated us like family.  He never pressured us or tried for a big sell job.  But he always took the time to meet with us and to keep us up to date on the new Nordhavn developments.  We received Christmas cards, brochures, updates and other valuable information from him over the years.

When our financial situation reached the point where we could look towards a new boat purchase, I initially worked with 2 other local brokers.  I thought that it was not practical to have a California based broker for such a major purchase.  But I had been spoiled by Jeff’s previous assistance.  These other brokers simply did not deliver on my expectations.

So I contacted Jeff and explained the situation.  He was not upset that I had “experimented” with other brokers and he got down to business to find us a boat.  We worked with Jeff for 6-8 months, investigating and making offers on several Nordhavns.  It was exciting and discouraging at the same time.  Jeff kept it all positive and was tireless in his efforts to find the right boat.

Eventually we stretched our range and looked at a newer, more expensive boat that was for sale in Kodiak, Alaska of all places!  The price was higher than we were comfortable with and the logistics of taking delivery of a boat in Kodiak were almost overwhelming.  I kept telling Jeff that Kodiak was closer to Russia than Canada!  Jeff stayed positive and systematically explained all the steps and challenges that we needed to consider and with his experience (and numerous lists!) he built up our confidence to give it a shot.

The negotiations took place over many weeks.  The parties were not coming together and we had pretty much given up.  I even told Jeff to withdraw our last offer.  But Jeff didn’t quit.  He worked behind the scenes and eventually worked out a deal that was agreeable to all and the papers were signed.

That was in March.  The boat was shrink-wrapped in icy Alaska.  Jeff negotiated a prolonged closing period because of the season and to account for moorage and insurance issues.  We scheduled a viewing, sea trial and survey for May when things were a bit warmer.  Jeff committed a week of his time to assist us with the sea trial and closing.  He flew pretty much directly from a holiday in the Bahamas to Kodiak.  What a contrast that must have been!

During that week Jeff tirelessly helped us become familiar with the boat and its systems.  His experience with the boat was invaluable and he provided us with many helpful tips (and more lists) that would assist us in bringing the boat home.  He worked well with the surveyor and the 4 of us had many good discussions over dinner.  Through it all Jeff was very professional and deftly bridged issues between us and the seller as to what items were to remain on board.  During the sea trial Jeff had me run the boat through several exercises to help me gain familiarity with how it handled in tight quarters.  He knew that the next time I would be on board we would be heading across the Gulf of Alaska so he wanted to impart as much knowledge as he could.  What was an enjoyable yet stressful time was made all the more comfortable with Jeff’s help and experience.  He was tireless for the entire week and thought of so many important things that I had never even considered.  In the end we signed off on the final subjects with smiles all around.

In early July I flew back to Kodiak with my brother and a friend to deliver the boat.  Jeff was on the phone or email checking in and providing helpful advice right up to the time we left the dock.  During the trip we kept in touch with Denise via Sat phone and Jeff kept in touch with Denise to find out how the trip was going and relayed advice on some of the little things that inevitably go wrong.

Through the entire process Jeff was unbelievable with the time and efforts he provided to make this all happen.  He was knowledgeable, professional and showed a genuine personal interest for me and my family.  I would not hesitate to recommend him to anyone in the market for a boat, regardless of the brand or the location.  Jeff can make it happen.

We have had the boat home for about 4 weeks now and Jeff continues to stay in contact with us to see how things are going.  He is happy to answer any questions we have or suggest places to get answers.  I consider him not just our broker but a friend.  If we are ever in the market for a bigger boat, although hard to imagine at this point, Jeff will be the guy we go to.  No question.

Thanks to Jeff and PAE, for helping us realize our dream. 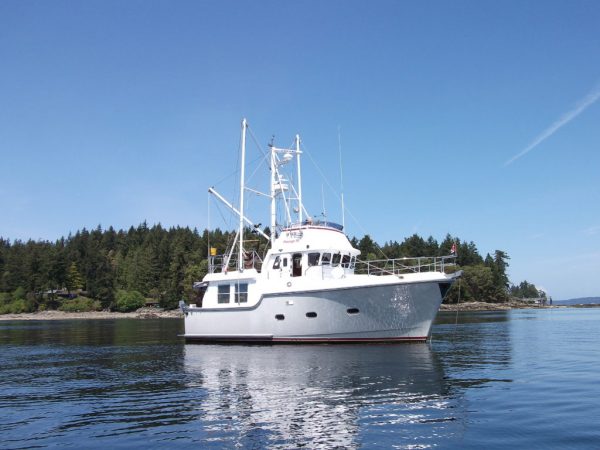