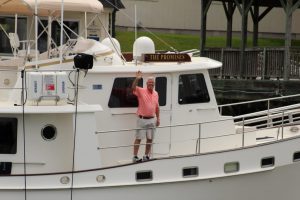 I met Jeff Merrill a few years ago at one of the Trawler Fest and always enjoyed spending time with him. We’ve had many trawler related, casual conversations and I find Jeff very approachable and fun to talk with. When I decided to sell my Beneteau Swift Trawler and look for a Krogen 44 I asked Jeff to represent me as a buyer’s broker. While on the hunt for the best Krogen, Jeff also gave me behind the scenes advice to help me sell my Beneteau, an experienced broker to bounce ideas off of while I was working through the sale. Once my Beneteau Swift Trawler closed we worked together in earnest to find a Krogen 44.

Jeff has a great relationship with Steve D’Antonio and I knew that having them both on my side would give me a one-two punch with both a knowledgeable broker who would look after my best interests and the world’s best inspector to check out every detail of the boat I wanted to purchase.

Jeff and I found a Krogen 44 in Florida and Jeff negotiated a deal that led to an accepted offer. During the survey dates (sea trial and haul out) Jeff educated me on various systems and explained how things work. He also kept his eye on the market and found out about another Krogen 44 that had just become available. This created a dilemma because I was very far along with the original purchase, but we put things on hold and went to look at the sister ship KK44. I don’t know any other brokers who would change tacks at the stage we were in, it would have been a no-brainer for Jeff to just let things be…but Jeff told me he was approaching this as if it was his money being spent and we both agreed that the second boat was a better value. So, we canceled the first offer and switched to boat number two, for this I will always be indebted to Jeff.

Steve had already done his inspection on the first 44, so the same survey team along with Steve was re-assembled to evaluate the second Krogen 44, called Next Dance. The sellers had really made some great improvements and loved their Krogen, but, like a lot of boat owners, wanted to order a larger Kadey Krogen, a 48AE. As a bonus, they were on board and completely available to tell me about their 44. We all clicked and I found the sellers to be wonderful people who were very giving in their time and made me feel me proud to take the helm from them. Next Dance was in better condition and had better equipment than boat number one. As I look back I see how easy it would have been to stick with the original plan and not make the change, but how much happier I am that we did.

We did the trial run, survey and haul out with no issues and closed the deal. Once I owned the 44, renamed The Promises, the relationship with Jeff continued. We talk and email regularly and he is genuinely concerned with my satisfaction and enjoyment. Jeff prepared a binder filled with training documents and check lists to accelerate my learning curve. I am amazed that Jeff, who has his HQ in California, travels to the east coast and especially Florida so often, but he told me he is a licensed yacht broker in CA and FL and spends a lot of time away from his desk to make things happen. His network of contacts, along with Steve’s resources really made them an incredible team to work with.
Communication was fantastic throughout and it was fun to be learning all about the boat before I actually owned her, a great boost to my comfort level.
There are a lot of details in the process of buying a boat (especially when you go through the process twice during the same run) and Jeff kept me on track and focused. Jeff has decades of cruising experience and his product knowledge of trawlers is second to none. For anyone in the market to purchase a trawler I highly recommend Jeff Merrill for his professionalism, enthusiasm and organizational skills. Jeff is more than a broker to me, he is now a good friend! 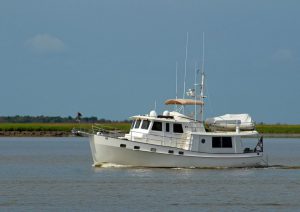