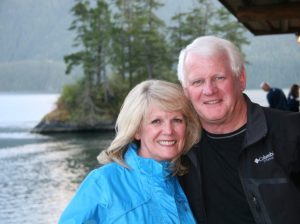 It was about 10 years ago I began my search for a reliable, seaworthy offshore passage maker. I spoke with several Canadian builders and even had a preliminary design done for a custom build. But the further I got into the project, it seemed to slide farther beyond my reach. At the Seattle Boats Afloat Show, I ran into Jeff Merrill who at the time was working for Nordhavn. After Jeff listened patiently to me for awhile, he opened a set of drawings of their latest creation, the Nordhavn 55. It had everything I was looking for in a comfortable, reliable, and well engineered “Ocean Crosser”.

It’s been said that when you’re buying your dream boat, you’re buying the company who builds it, because the company’s reputation is inextricably connected to your boat as long as you own it. But I found the salesman who sells it to you is of equal importance. There are countless details and decisions that are made, and I found Jeff Merrill is a master at cutting the meal up into bite sized pieces. He carefully fed them to me making useful recommendations along the way and keeping me informed with thoughtful emails and photos.

Looking back, it seemed Jeff played the part of Owners Representative, that he was looking out for my interests first. This was really was the foundation of a long and close relationship with Jeff. My new Nordhavn 55 was one of the first commissioned in Seattle, Jeff made several trips to Seattle to check on progress and to train me on systems and boat handling.

In the years that followed, Jeff continued checking in with me, he asked about the boat and the places we’ve travelled to. We caught several of his classes taught at the Trawler Fest where he continues to be a leading proponent of Do-it-Yourself ocean crossing.

Jeff has been involved with boats his entire life. He has been nearly everywhere in about every kind of boat imaginable. He enjoys meeting people and he’s a very good listener. When it’s time to look for my next boat, I’ll start with Jeff Merrill, a good friend with a proven track record.