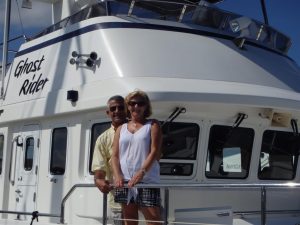 We first met Jeff In January of 2015 at the TrawlerFest in Riviera Beach. Michelle and I had been researching our next boat-buy for about 2 years, and at that point we had narrowed it down to Kadey-Krogen and Nordhavn, roughly in the 47-to-55 foot range. That TrawlerFest was our opportunity to once again get onboard and hands-on with both brands, but also to attend several targeted seminars aimed at educating wannabe wanderers such as us.

And that was our first encounter with Jeff.

His “Pride of Ownership” seminar was, of course, quite illuminating and helpful. But he was also in the process of selling a brokerage Nordhavn 55 at the Fest, so we also ended up spending quite a bit of time with him aboard that (very nice) boat. Eventually we got into the discussion of which boat was best for us. I was impressed not only with his knowledge of the boats, but also his objectivity – and what appeared to be a genuine interest in what was best for us, not just what he happened to be selling at the time. We also met his long time friend and JMYS associated Florida broker, Ray Danet. We spent a lot of time talking with the two of them and learned a lot of insights into many aspects of trawler ownership during these casual conversations.

Fast forward a couple of months…we’d focused in on the Nordhavn 47 as the best fit for us, but we wanted some confirmation – and we’d become convinced that we really wanted (and perhaps needed) a broker to champion our buy-side interests. Jeff had kept in touch with us, he has great follow up, but we hadn’t yet formalized a committed relationship so I pinged Jeff to see if he was interested in being our representative and fortunately he was. Then the real education began.

The amount of information and knowledge Jeff brings to the table is astounding, but even more impressive is his willingness and ability to share it….with considerable enthusiasm. We probably learned more about trawlers and the Nordhavn 47 in a month via emails and phone conversations than we’d managed to in the previous 2 years. The manner in which he led us through objective and comparative analysis on each potential vessel was extraordinary. And his constant reminder that “you don’t need a boat” helped keep us centered. He also put us in touch with several Nordhavn 47 owners (most of whom are clients of Jeff and his far reaching network) exposing us to valuable first-hand, real-world feedback.

Once we got to the offer / survey / sea trial phases (over the course of several months) Jeff continued to facilitate the process with objectivity and with hugely helpful pointers and suggestions. (We wondered: is there anyone in the industry Jeff doesn’t know?) But he never pushed us. Once we committed to the purchase, Jeff was also instrumental in shepherding all the moving parts and pieces into a coherent and stress-free closing process. Jeff has developed a proprietary time line document that had dates, deadlines, and all of the relevant details outlined and organized. That he was able to do all this even though he was based on the west coast of the U.S., and we were doing all of this in Florida, was equally amazing.

Finally, when the evaluation and purchasing process was over, and the actual ownership experience began, Jeff was right there on board with us. It’s hard to describe the immense body of knowledge and practical experience that he brings with him and manages to impart, but let’s just say he drastically accelerated our learning process – and with an easy style that made it great fun as well as educational. Jeff flew over to Florida and we had several fun days aboard cruising, labeling, working on spread sheets and reviewing many of the critical aspects of owning a trawler all of which made us intimately more comfortable and built up our confidence.

Lastly, and very importantly, we made a good friend, and in the process gained a mentor for the long haul to whom we can reach out at any time. Can’t even begin to put a value on that. 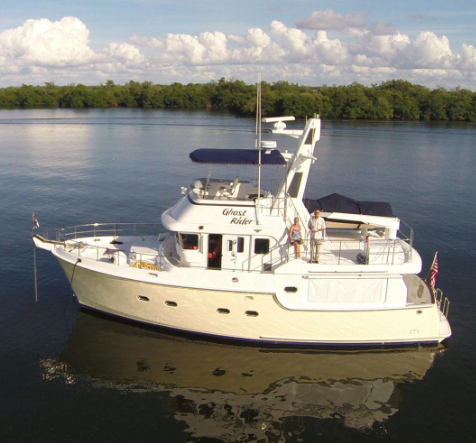