The modern trawler world has been popularized by PassageMaker magazine which is based in Annapolis, MD.  This same seafaring city has a rich history and is also famous for the U.S. Naval Academy, national power and sailboat boat shows, a great collection of restaurants, bars and of course the people who live there and visit.  The people who hang out in Annapolis are active cruiser and racers.

Across the Bay Bridge you reach the eastern shore and are two steps removed from city life.  The Chesapeake waters have carved shorelines that blend into numerous inlets and coves, it is a boaters’ paradise.  In 2015, TrawlerFest was moved to the eastern shore of the Chesapeake to the “Bay Bridge Marina” in Stevensville, MD as the venue for their annual mid-Atlantic event.  Previous mid-Atlantic locations have included Solomons, MD and Baltimore, MD and to the credit of the PMM TrawlerFest staff they keep things fresh by moving around.  The 2015 event was a bust, because of hurricane Joaquin, but 2016 was a resounding success.

The 2016 TrawlerFest dates were September 27 – October 1 and there was a wide assortment of trawlers on display, vendors in the tents and a varied selection of seminars to attend.

Jeff Merrill was invited to give two presentations, Bluewater Cruising and Dialing in your Trawler. Jeff also participated in the Cruisers Roundtable presided over by veteran cruiser and circumnavigator, Bruce Kessler.

One of our favorite listings, the custom 73’ Snowbird, Retired Sailor III, was brought over from Deltaville and was the largest trawler in the event.  Since Jeff was spending a good deal of his time in the classroom teaching, Ray Danet flew up from Florida to make sure we had RSIII covered. 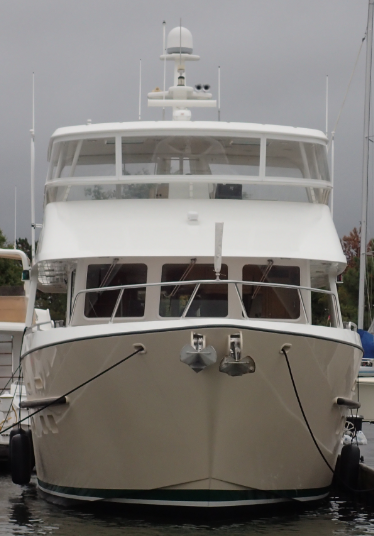 Here are the course descriptions for Jeff’s talks:

This seminar is designed for skippers and crew wanting to make offshore passages to reach distant ports; it’s designed to be both an introduction and a refresher. Jeff Merrill, who has logged more than 15,000 sea miles, much of it training clients, will discuss the essential preparations and fundamental skills. Topics will include weather considerations, route planning, watch standing, engine room checks, navigation/electronics operations, and more. The goal is to help make sure you and your trawler are ready before you depart, knowing what to expect under way and understanding what it is really like to operate your trawler at sea.  Many helpful pointers will help ensure you, your boat and your crew are prepared so your next open water trip is safe, comfortable and successful. A certificate of completion will be issued to all attendees

Dial-In Your Trawler with Jeff Merrill

Over the years and through his experiences on hundreds of trawlers, yacht broker Jeff Merrill has amassed a collection of “good ideas” and “best practices” that trawler owners are using to better monitor their vessels. These simple and effective techniques apply to most power cruising boats. Tricks of the trade and helpful reminders will help take some of the guesswork out of tracking various systems and equipment on board your trawler. Little details like reference marks for needles on analog gauges, a dry-erase board in your engine room, anchor chain marking and many other common-sense tips make this an engaging and informative seminar that you won’t want to miss. Merrill will share photos of these ideas and also discuss an assortment of products that you should consider using on your trawler that will not only make your life more enjoyable, but may also favorably affect your eventual resale value.

Each TrawlerFest sees a number of familiar faces who stop by to say hello and this year was no exception.   It’s hard to report on each of the dozens of visitors we saw, but we’re going to focus on two that stood out.  Guy Bugbee is an airline captain who we see at trawler events all over the country, he and his wife have a Nordic Tugs 32 which they are selling to move up to a larger, full displacement trawler.  Guy I and I have known each other for many years and when he told me he had the full PassageMaker magazine collection, but was going to throw them away after reading them one more time, I pleaded with him to send them to me, which he graciously did.   Guy is a planner and he has been intrigued by trawlers for at least two decades – you already know that he got on the bandwagon with issue number one of PassageMaker, but he also went to the very first Trawler Fest and has the T-shirt to prove it from 1996! 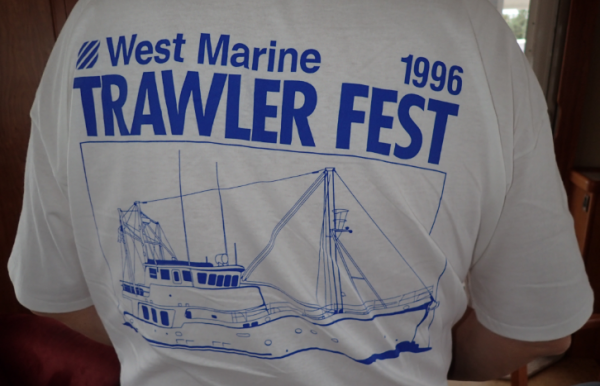 The other highlight was a visit aboard Retired Sailor III by Bill and Laurene Parlatore, the founders of PassageMaker magazine.  I had an ulterior motive with my invitation, I brought a copy of issue number one (yes, from Guy Bugbee) and was thrilled to have the Parlatore’s sign the cover, now framed and a cherished possession. 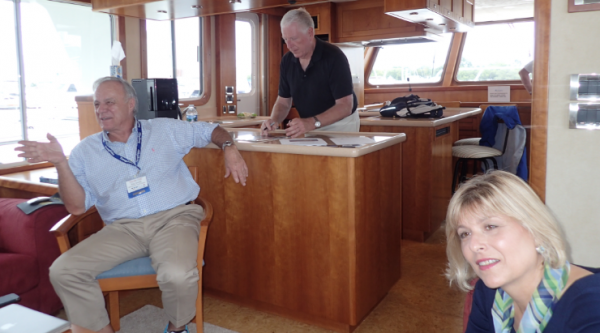 TrawlerFest always attracts a cast of regulars and we had several homecoming visits aboard. We had a surprisingly large group of interested trawler people come through Retired Sailor III, including some familiar faces and some new clients.  Bob Senter “Lugger Bob” was in town for the event and enjoyed talking diesels with people aboard the Snowbird 73.  The legendary Bruce Kessler usually makes the rounds and we I enjoyed a nice dinner in town with Ray, Bob and Bruce.

iminishing, the boat builders are seeing a boom in new construction which is good for everyone. Brokers and sellers are seeing (and have been for the last 24 months) a true sellers-market where discounting is not as deep, and boats are changing hands in a shorter time frame. Nothing lasts forever, but as I’ve told many people recently, these are “the good old days and I hope they do stick around for another couple of decades!” 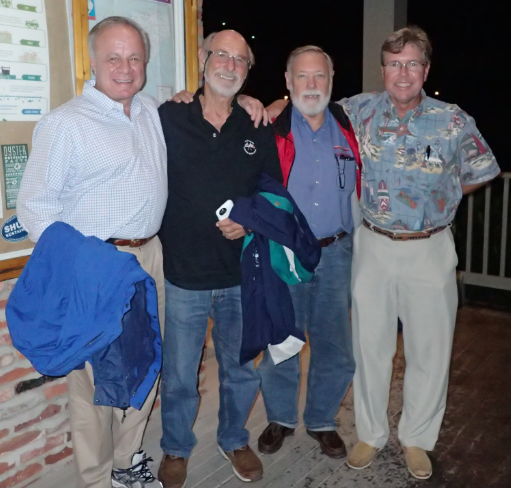 All of us at JMYS look forward to the TrawlerFest events, this was the last one for the year and we are on the schedule to participate in the 2017 program.

For more information on the upcoming events, please go to www.passagemaker.com/trawlerfest we hope to see you at the next one which is scheduled for end of February, early March, 2017 in Stuart, Florida.